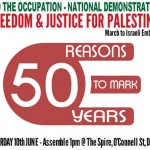 The Ireland-Palestine Solidarity Campaign has called a National Demonstration this Saturday 10th June (assembling 1pm at the Dublin Spire) to mark the fiftieth anniversary of the ongoing brutal Israeli military occupation and illegal colonisation of the West Bank, East Jerusalem and Gaza, and 100 years of Palestinian resistance to the injustice that began with the Balfour Declaration in 1917 under which British imperialism declared that Palestine could be colonised by the Zionist movement at the expense of the indigenous Palestinian people.

Here are fifty reasons why you should come along on Saturday:

• 100 years of dispossession and injustice enduring a violent colonial project in historic Palestine
• 50 years of brutal military occupation of the West Bank, East Jerusalem and Gaza
• 4.5m Palestinian living under military occupation, with 2 different legal systems for Palestinians and illegal settlers
• 1.6m Palestinians living under more than 50 discriminatory laws as citizens of the Israeli state
• 7m Palestinian refugees denied their UN-mandated Right of Return to their homes
• 10,000+ Palestinians killed in 30 years, including 2,400+ children
• 800,000+ Palestinian political prisoners since 1967, a 99.74% ‘conviction’ rate in Military Courts
• 100,000+ people interned without charge or trial since 1967
• 6,300 Palestinian political prisoners today. 300 children. 61 women. 500 internees.
• 700 children arrested every year, 2/3rds of them tortured in some way according to DCI-Palestine
• 60% of the West Bank off limits to Palestinians
• 48,000+ Palestinian homes and structures demolished since 1967. 1000+ destroyed or stolen last year, leaving 1,600 people homeless and affecting 7,000 livelihoods.
• 800,000+ olive trees destroyed since 1967
• 800,000+ illegal Israeli settlers in 240+ illegal colonial settlements
• 710km illegal apartheid wall, 85% of it built beyond the Green Line, stealing a further 10% of Palestinian land
• 500+ checkpoints, roadblocks and other obstacles in the West Bank
• 230km of Israeli-only or restricted access apartheid roads in the occupied West Bank
• 27% and rising unemployment rate, with a rate of 40% among under 25s. In Gaza the rate is 42%, the highest in the world.
• 25% of Palestinians and rising are living in poverty. 75%  of the East Jerusalemite Palestinians, and 82% of EJ children, are below the poverty line.
• 14,000+ Palestinians have been stripped of their right to live in Jerusalem
• €250b in annual lost revenue due to occupation, the World Bank says this is “unsustainable”
• €100s of millions worth of goods produced in illegal Israeli settlements exported every year
• 10 years of illegal and inhumane siege on the 2m people of Gaza
• 95% of Gaza’s water is not drinkable. Electricity is only available for around • 6 hours every day, and Gaza’s 13 hospitals and 54 medical centres are running short of funds and fuel for emergency generators.
• 2020: the year by which the UN estimates Gaza will become “unlivable”
• 2 Palestinians being born under occupation every hour
• 30+ UN Security Council Resolutions that Israel has been the subject of for violations it has never taken action to remedy
• ZERO accountability for Israel’s intentional law breaches, human rights violations, war crimes, apartheid, military occupation and other crimes against the Palestinian people.

These are 49 reasons, there are many more. But there is one more reason in particular that you should join us this Saturday, and that is that, like all peoples, Palestinians deserve freedom! They deserve justice. They deserve equality. And they deserve our solidarity as they struggle for their rights.

So please, show you stand with the people of Palestine. Join the protest this Saturday 10t June, assembling at 1pm at the Spire on O’Connell Street in Dublin. Bring friends and family. Help us get the word out over the next few days. See you on the 10th!