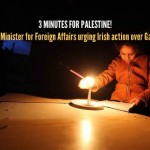 The situation in Gaza has become unbearable for the two million people living under Israel’s decade-long illegal siege. Just last week the UN declared that “the ‘unliveability’ threshold has already been passed” in the strip and this has been compounded by Israel’s policy of reducing electricity supply to a few hours every day.

For a decade of cruel and illegal siege, for three devastating criminal assaults, for near-daily ceasefire violations, and for making Gaza unlivable, the Israeli state has faced not a single sanction from the international community.

This impunity must end, so we are asking you to take just three minutes to write to the Minister for Foreign Affairs and Trade, Simon Coveney, to let him know that Ireland’s inaction on the Israeli-imposed crisis in Gaza is unacceptable, and that you demand action.

A model letter is below, but it’s always better to write your own if you have time.

You can also join the emergency lunchtime vigil outside the Department of Foreign Affairs and Trade on Thursday 27th July (1pm – 2pm) demanding action from the government. Full details are here.

Send to Email: simon.coveney@oir.ie
Please CC:  hq-minister@dfa.ie and your local TDs.
Or alternatively: Use the DFAT contact form here

I am writing to you to ask that you take immediate action to use Ireland’s influence at international and EU level to apply pressure on the Israeli state to immediately cease its denial of electricity to the people of Gaza in occupied Palestine.  This cutting of a basic human necessity to only a few hours every day is just the latest crime taking place under the rubric of Israel’s decade-long cruel and illegal siege of Gaza. Electricity shortages threaten every facet of normal life and are extremely dangerous for the sick, for babies in incubators, dialysis and cancer patients and anyone needing medical treatment in Gaza where medical stocks are already at chronic to zero levels.

I was extremely disappointed by your recent statements in the Dail that the electricity crisis in Gaza is the fault of internal Palestinian divisions. Under international humanitarian law (IHL) Israel is the occupying power in Gaza and has ultimate responsibility for the wellbeing of all the people whose lives it exerts “unconsented-to effective control” over. Unfortunately, by doing so you simply repeat Israeli propaganda claims that Israel is merely a disinterested bystander whose hand is being reluctantly forced on the issue. In fact, as noted by the Israeli human rights group GISHA, the opposite is the case:

“Israel is not just a service provider, responding neutrally to a client’s request. Given its extensive control over life in the Strip, Israel is responsible for enabling normal life for its residents. Israel is obligated to find solutions that will allow for the continued supply of electricity at existing capacity, and to take active steps toward increasing supply, to allow residents access to acceptable living conditions… [other factors] do not diminish Israel’s marked accountability for the situation.”

In addition, as I’m sure you are aware, it is Israel that unilaterally deducts payments for electricity from tax revenues it itself collects on behalf of the PA. As GISHA again notes:

“Payment for electricity in Gaza is automatically and immediately deducted from tax funds Israel collects on behalf of the Palestinian Authority … [the PA Ministry of Finance] informed us that Gaza’s electric bill is settled unilaterally. Israel only informs the Palestinians afterward.”

Thus, it is clear that Israel can refuse to accede to the PA’s apparent refusal to pay for the electricity in Gaza – however, it chooses not to, in violation of its responsibilities under IHL.

Israel’s decade-long siege has been declared illegal by various UN bodies, including the office of the UN Secretary General which calls it “a form of collective punishment … contrary to Article 33 of the Fourth Geneva Convention.”

A report issued this month by the UN Country Team in the Occupied Palestinian Territories (UNCT-OPT) declared that:

“[A previous UNCT-OPT report predicted that] Gaza was on track to become ‘unlivable’ by 2020. Sadly, as we check-in on those same trends again in this 2017 report, the deterioration has accelerated…. With electricity at only 2 hours a day … and youth unemployment at 60%, the ‘unliveability’ threshold has already been passed.”

This is an astounding indictment not only of Israel’s illegal policies towards Gaza, and the Palestinian people in general, but of the abject failure of the international community – sadly, and shamefully, including Ireland – to hold Israel to account for these violations. Whether it be the three huge assaults on Gaza in 2009, 2012 and, most devastatingly of all in, 2014 which together killed thousands of people and ruined Gaza’s infrastructure, the ongoing cruel and illegal siege, near-daily shooting attacks on fisherfolk and farmers, incursions and razing of farmlands, or the current calculated policy to reduce electricity during a searing heatwave , Israel has faced not a single sanction from any Western country. Israel acts in such a criminal manner because it knows it enjoys impunity.

For the sake of the Palestinian people, this has to end. Israel can no longer be treated like any ‘normal’ country; it is a state that rules over the lives of millions of people who have no voice, no vote and no rights. Words are simply not enough. It is time for the Irish government to call this situation what it is – apartheid – and beyond time for this state to act. It’s time to treat Apartheid Israel like Apartheid South Africa before it and impose sanctions until Palestinians are free.

In the immediate term, this means that the Irish government must act now to pressure Israel to restore Gaza’s electricity and to end the illegal siege of Gaza. It is unacceptable that our government not do anything to intervene in this humanitarian nightmare imposed upon Palestinians by Israel.

Palestinian civilians in the OPT, including Gaza, are “protected persons” under IHL, for whom the ultimate responsibility for their wellbeing rests solely with the occupying power, ie Israel, which must guarantee their welfare and safety under the Fourth Geneva Convention, in particular Articles 33, 55 and 56. Failure to do so is a war crime. Failure to punish war crimes encourages the commission of yet more war crimes. It is time to act.