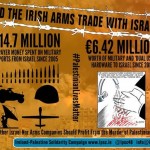 Three weeks ago we launched the End the Irish Arms Trade with Israel campaign at a press conference in Dublin. Since then we’ve seen support for the campaign grow from many sectors of Irish society with public figures, politicians and political organisations, academics and intellectuals, trade unions and trade unionists, human rights activists and NGOs along with thousands of ordinary Irish citizens and residents, all signing up to be endorsers of this campaign.

We’re now asking YOU to sign up if you haven’t done so already. It only takes ONE MINUTE to sign the petition online by clicking the link below.

If you would like to help spread the word and grow the campaign, then we would ask you to forward this article to your family, friends and colleagues, and to share the petition on Facebook and Twitter and other social media websites.

Want to give more time? You can help build the campaign even more, by visiting the campaign page and taking part in the other actions items we’re asking people to do. Neither Israel nor arms manufacturers in Ireland should be allowed to profit from the killing of Palestinians; this trade in death must end. We call upon the government of Ireland to end the Irish arms trade with Israel, and to advocate for an international arms embargo at EU and UN levels until Israel ends the occupation of Palestinian land and complies fully with its obligations under international law.  – Read more about the campaign here.