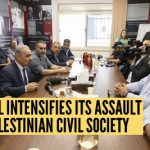 As Apartheid Israel intensifies its assault on Palestinian civil society, the Ireland-Palestine Solidarity sends our solidarity to our sisters and brothers in the Palestinian NGOs under attack.

We have continued our efforts to push the Irish government to move from words of condemnation into taking concrete action. Below you will find a copy of our latest letter to the Minister for Foreign Affairs, Simon Coveney.

We are writing to follow up on our previous letter regarding the Israeli state’s actions targeting Palestinian civil society, and to bring to your attention a letter that has been sent to EU High Representative Josep Borrell regarding same.

Since our last letter, you will be aware, our friend and colleague Mr. Shawan Jabarin, the General Director of Al Haq, has received personal threats from the Israeli security services. Meanwhile, the director of at least one of the other organisations, Mr. Khaled Quzmar of DCI-Palestine, has been brought in for questioning. Both men have been guests of the Cross Party Oireachtas Friends of Palestine Group over the past few years. Independent UN experts have called for Israel to drop its ‘terrorist’ designation, and EU High Rep. Borrell said clearly that “these actions are not acceptable.”

Earlier this week we learned of the decision by an Israeli court to convict Mr. Mohammad al-Halabi, the head of World Vision in Gaza, on baseless charges. Having already spent six years behind Israeli bars, he is now set to serve another six. Human rights groups, including Human Rights Watch, have condemned the “cruel and inhumane” treatment of Mr. al-Halabi.

For two years Israel has refused to grant visas to international workers in the UN Human Rights Office in occupied Palestine, and earlier this week the UN High Commissioner for Human Rights Michelle Bachelet noted that “Israel’s treatment of our staff is part of a wider and worrying trend to block human rights access to the occupied Palestinian territory.”

It is also worth noting that Irish citizens on a factfinding trip have been deported from Palestine by Israeli officials, and members of the Ireland-Palestine Solidarity Campaign and 19 other international advocacy groups are barred from ever entering Palestine simply for advocating for Palestinian rights.

We are seeing a concerted and years-long assault on both Palestinian and international civil society by the Israeli state. These are not the actions of a democratic state.

Indeed, as the UN International Convention on the Suppression and Punishment of the Crime of Apartheid (Article II-f) states: “Persecution of organizations and persons, by depriving them of fundamental rights and freedoms, because they oppose apartheid” is one of the “inhuman acts” falling under the Crime of Apartheid.

These are actions that are, as High Rep. Borrell correctly stated, unacceptable. Or, rather, they should be unacceptable. Yet the EU, and Ireland, continue to treat Israel as a state that it is acceptable to not only continue to do ‘business as usual’ with, but to expand and deepen relations with.

Attached you will find a letter from our colleagues in the European Coordination of Committees and Associations for Palestine (ECCP) to High Rep. Borrell. We fully support and reiterate the demands of this letter, in particular the call to cancel the upcoming EU-Israel Association Council meeting, something about which we wrote to your office last month.