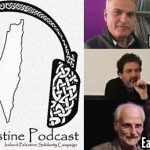 In November 2019, Trade Union Friends of Palestine and a number of Irish trade unions hosted a two day conference in Dublin on the situation of Palestinian children under Israel’s Apartheid regime. In this week’s episode of the Palestine Podcast, we hear from three speakers in a session focused on the arrest, trial, imprisonment and traumatisation of children in Israel’s military detention regime.

Khaled Quzmar is General Director of Defense for Children International – Palestine. He specialises in issues of juvenile justice and grave violations against children during armed conflict, and since 1995 has represented Palestinian children in Israeli military courts.

Nery Ramati is an attorney and partner in Gaby Lasky and Partners Law Office, a leading human rights office in Israel, specializing in freedom of expression and protests. He has represented Palestinian, Israeli and international human rights and anti-occupation activists in Israel’s courts for a decade.

Eamon McMahon is a founder member and secretary of Trade Union Friends of Palestine and has been a leading voice for justice in Palestine in the Irish trade union movement. A retired NHS psychotherapist, he has a special interest in the traumatisation of Palestinian children under the Israeli occupation.

With thanks to Trade Union Friends of Palestine for permission to use the audio.