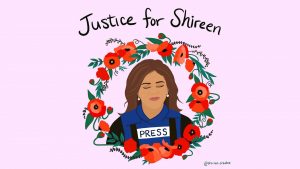 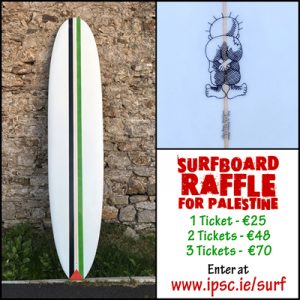 Surfboard Raffle: Win a Handcrafted Classic Californian Longboard Here is your chance to win a handcrafted Classic Californian-style nose riding longboard. This surfboard board is suited to all levels of surfers whether you are just starting out, a part timer, a weekend warrior or a full on swell chaser! Kindly created and donated by TH Surfboards in Bundoran this beauty is dressed in the red, green, black and white colours of the Palestinian flag topside with Handala – the symbol of Palestinian refugee resilience – on the underside. CLOSING DATE – November 29th 2022. Enter now – buy a ticket! … Continue reading →

← Older posts Newer posts →
Manage Cookie Consent
To provide the best experiences, we use technologies like cookies to store and/or access device information. Consenting to these technologies will allow us to process data such as browsing behavior or unique IDs on this site. Not consenting or withdrawing consent, may adversely affect certain features and functions.
Manage options Manage services Manage vendors Read more about these purposes
View preferences
{title} {title} {title}