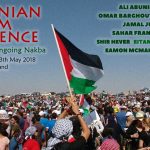 Dublin’s Liberty Hall will play host to the ‘Palestinian Freedom Conference: Overcoming the Ongoing Nakba’ this coming Saturday 12th and Sunday 13th May. The conference will feature human rights defenders, experts, academics and activists from Palestine, Israel, Ireland and elsewhere. Tickets can be booked through the conference website at https://www.ipsc.ie/pfc

To mark the 70th anniversary of the Palestinian Nakba, the Ireland-Palestine Solidarity Campaign, Trade Union Friends of Palestine and BADIL Resource Center for Palestinian Residency and Refugee Rights are honoured to host an inspiring and action-focused weekend of talks from important voices in the Palestinian struggle for Freedom, Justice and Equality.

Speaking ahead of the conference, the Lord Mayor of Dublin, Mícheál Mac Donncha said: “I am honoured to have been asked to open this historic Palestinian Freedom Conference, where leading experts, activists and human rights defenders will give us the benefit of their knowledge and experience so we can be better prepared and equipped to help the indomitable Palestinian people carry on their struggle for justice, equality and freedom from Israeli apartheid.

“It is most apt that a conference discussing Palestine’s anti-colonial resistance takes place, not only in the city of Dublin whose City Council just voted to support the Palestinian-led Boycott, Divestment and Sanctions (BDS) movement, but specifically in Liberty Hall, one of the headquarters of the Irish anti-colonial struggle in the early 20th century.  I look forward to welcoming our Palestinian, Israeli and international sisters and brothers to this historic location as we gather to discuss the liberation of the Palestinian people from seven decades of oppression, dispossession, colonisation, apartheid and forced exile.”

IPSC Chairperson Fatin Al Tamimi spoke about the theme of the conference: “This May is the 70th Anniversary of Nakba Day – the Day of the Catastrophe – when Palestinians everywhere commemorate the ethnically cleansing of over 750,000 indigenous Palestinians from their homes between 1947 and 1949, forcing them into exile so that the state of Israel could come into existence.

“Yet, as the theme of this conference makes clear, the Palestinian catastrophe it is a process ongoing to this day, seventy years later. Whether we talk about the refugees and their descendants, who now number in the millions, who are still denied their right of return to their homes, or the process of ongoing ethnic cleansing via occupation, colonisation, apartheid, and cruel siege continuing apace in Palestine, we can still see the ongoing Nakba everywhere.”