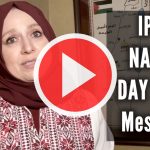 Today is Nakba Day, which marks the 72nd anniversary of the Palestinian Nakba (‘Catastrophe’) which saw the expulsion of over 750,000 people, two-thirds of the indigenous people of Palestine, forcibly uprooted from their homeland in a brutal act of ethnic cleansing that facilitated the foundation of the Apartheid State of Israel.

Today, Palestinian refugees are trapped in an ongoing Nakba, many of them risking their lives crossing the Mediterranean to flee conditions in Syria, facing endemic poverty and discrimination in Lebanon, discriminated against as unrecognised internally displaced placed people inside the Apartheid State of Israel, subject to attacks by Israeli occupation forces on refugee camps in the West Bank, and surviving under Israel’s cruel illegal siege of Gaza – and all under the shadow of the Coronavirus crisis.

1) Take a few minutes to write to your local Fianna Fail and Green TDs to urge them not to betray their election promise to enact the Occupied Territories Bill. There are letter writing tips and contact details on our website here.