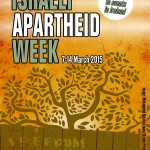 Israeli Apartheid Week is an annual international series of events (including rallies, lectures, performances, films, multimedia displays and protest actions) held in cities and campuses across the globe. Last year was incredibly successful with over 200 cities taking part in 30 countries. IAW aims to raise awareness about Israel’s apartheid policies towards the Palestinians and to build support for the growing campaign of Boycott, Divestment, and Sanctions (BDS) against Israel. Once again the Ireland Palestine Solidarity Campaign is proud to be hosting a series of events in Ireland.

Unprecedented numbers of people took to the streets to protest Israel’s recent massacre of more than 2,300 Palestinians in Gaza, yet most governments and many corporations continue to provide Israel with support for its crimes. IAW is a chance to speak out about Israel’s most recent war crimes and all its violations of international law, as well as a way of campaigning to end international support for them.

Below you will find a full listing of events taking place around Ireland during this year’s IAW – including some events that are not organised as part of Israeli Apartheid Week, but which we think will be of interest to our supporters. We hope you will be able to make it along to some of them.