BOOK: 'The Balfour Declaration: Empire, the Mandate and Resistance in Palestine' by Bernard Regan 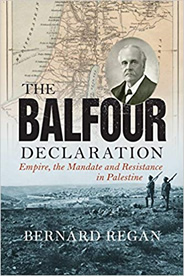 The true history of the imperial deal that transformed the Middle East and sealed the fate of Palestine.

On 2 November 1917, the British government, represented by Foreign Secretary Arthur Balfour, declared it was in favour of “the establishment in Palestine of a national home for the Jewish people.” This short note would become one of the most controversial documents of its time.

A hundred years later, Bernard Regan recounts the composition of the Balfour Declaration as one of the major events in the history of the Middle East. Offering new insights into the imperial rivalries between Britain, Germany and the Ottomans, Regan exposes British policy in the region as part of a larger geopolitical game. Yet, even then, the course of events was not straightforward, and Regan charts the debates within the British government, the Zionist movement, and the Palestinian groups struggling for self-determination.

The after-effects of these events are still being felt today. Bernard Regan’s urgent, timely history excavates the origins of the current crisis.

Bernard Regan served for twenty-five years on the National Executive of the National Union of Teachers. He has been publicly campaigning in support of the rights of the Palestinian people to self-determination since 1982, for much of that time as an executive member of the Palestine Solidarity Campaign. He was the principal author of the groundbreaking resolution adopted by the Trade Union Congress in 2006 in support of Palestinian rights. He was the first recipient of the NUT’s Steve Sinnott Award (2015) in recognition of his contribution to international solidarity. He gained his PhD in 2016 studying with the Palestinian historian Nur Masalha. He has contributed to journals, including the Journal of Holy Land and Palestine Studies. He is currently a Visiting Research Fellow at St Mary’s University in the Department of Arts and Humanities.