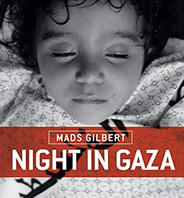 In the summer of 2014, Gaza was attacked by Israel for the fourth time since 2006. This attack lasted fifty-one days. Mads Gilbert, a Norwegian doctor, had worked at al Shifa Hospital during each previous conflict, and in July 2014 he went back there. While he was helping the wounded, he kept a camera in the pocket of his green operating scrubs. In this book, he tells the story in words and images of the fifteen days of bombing and human suffering that he witnessed.

Mads Gilbert is the Medical Director of the Clinic of Emergency Medicine at the University Hospital of North Norway and a professor at the University of Tromso (UiT), the Arctic University of Norway. In addition to his work in Norway, since the 1980s he has been heavily involved in medical solidarity work around the world, carrying out training programmes and helping war wounded patients in Burma, Angola, Afghanistan, Cambodia and Lebanon, among other places. Over the last fifteen years, his medical solidarity work has been mostly in Gaza, occupied Palestine. Gilbert has also been an active member of the Red Party (Rodt) and has served several terms as a councillor in the county of Troms. He has published a number of textbooks, and his book Eyes in Gaza, written together with Dr Erik Fosse, was translated into English in 2010. Gilbert was appointed a Commander of the Order of St Olav in 2013, in recognition of his international work and his services to emergency medicine in Norway.