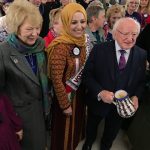 Ms. Tamimi’s speech praised the role of women in the Palestinian fight for freedom, justice and equality, and located the struggle for Palestinian liberty within the broader struggle against oppression and injustice everywhere. She ended by reading a poem entitled ‘Here We Shall Stay’ by Palestinian poet Tawfiq Ziad.

During his speech, to a round of applause, President Higgins took the time to speak about Palestine, saying that he was “so pleased to see representatives here of the people of Palestine who have struggled for so long.” The President also noted that “We must never be afraid and we must encourage young people when they are speaking about rights that rights have no borders, either in space or time, and wherever people are being deprived of their rights it doesn’t just affect those who are hit most acutely, it affects us all – and we are all lessened by a world that does not recognise rights.” The President also recalled his visit to Palestine in the wake of the first intifada and said “I think these issues, issues that are local, are linked to issues that are national, and they are linked to issues that are global.”

Ms. Tamimi presented the President and his wife Sabina with a ceramic jug from her native Hebron (Al Khalil) and a note asking them to keep the Palestinian people in their hearts. Below the text of the speech delivered by Fatin Al Tamimi:

My name is Fatin Al Tamimi, and it is my honour to address you on this International Women’s Day.

I am the Chairperson of the Ireland-Palestine Solidarity Campaign. I am an Irish citizen, and I have lived in this wonderful country for the past 30 years. But as much as I love Ireland and the welcome it has extended to me, I am also a Palestinian, and I am forced by Israel to live in the Diaspora. Due to Israel’s racist entry law system that discriminates against Palestinians I am not permitted to return and exercise my right to live in my homeland.

Israel’s crimes against the Palestinian people are many – there are uncountable human rights reports filled with these criminal records. Today, in my short talk I would like focus only on Israel’s treatment of Palestinian women, beginning in the period of 1947 to 1949. We Palestinians call this period the Nakba – Arabic for cathastrophe. It saw the expulsion of over 750,000 Palestinians, around half of them women, violently uprooted from their homes and forced into exile. In addition to massacres like the infamous slaughter at Dier Yassin, many Palestinian women and girls were raped and killed by Zionist-Israeli colonial forces – a vicious warning to others that this was the fate that would befall those Palestinians who refused to leave their homes.

Having taken over and colonised 88% of Palestine, in 1967 Israel occupied the rest – the West Bank and Gaza. Here are just a few statistics on how women have fared under this occupation. Hundreds have been killed by Israeli occupation forces. Thousands more have been made homeless by home demolitions. Violence and harassment by the military is commonplace. Scores of pregnant women have been forced to give birth at Israeli checkpoints – at least 36 of these resulted in the death of the baby.

But women are not merely victims – we are warriors too, and we struggle in many different and creative ways. We have been militants, frontline organisers, teachers, politicians, lawyers, human rights defenders, community activists, smugglers, and heads of households.

And for fighting back we are punished by Israel, with death, imprisonment and exile.

Take Khalida Jarrar, a Palestinian parliament member and feminist, imprisoned multiple times, she is now sitting in jail charge or trial by Israel – an experience familiar to Irish revolutionary feminists, like Countess Markievicz (MARK-E-A-VITZ), Kathleen Lynn, Helena Moloney and many more who fought for both national and women’s liberation.

Or take the case of young Ahed Tamimi, the teenager whose case has made headlines all over the world. Ahed has been imprisoned by the Israel since December for slapping a solider of the occupation who invaded her village – her trail keeps being pushed back, she remains in prison for something as simple as a slap. Other women of the family have also been targeted. Ahed’s case has made headlines, but she is not alone. Israel has imprisoned over 10,000 females – including hundreds of young girls – since 1967. Today there are 60 women amongst the 6,000 Palestinian political prisoners in Israel’s jails. Two weeks ago Israel released one of the youngest political prisoners in the world, 13 year old Razan Abu Sul, imprisoned for two months for throwing stones at heavily armed soldiers.

Of course, Palestinian society is not perfect, and we face many internal struggles for equality with Palestinian men. These are issues common to all movements for women’s empowerment – but Palestinian women suffer first and foremost as a result of Israel’s racist system of occupation and apartheid and colonialism.

Justice is never merely handed over by an oppressor. It must be demanded and fought for. Sometimes there are great victories in the struggle, sometimes there are terrible setbacks – but know this – we Palestinians, and our allies around the world, will never give up our fight for freedom. Today Palestine, like South Africa before it, is at the centre of a matrix of colonial, racist and gendered oppression; if we can win freedom, justice and equality in Palestine, we can win it everywhere.

I have already mentioned that Israel’s racist laws prevent me from returning to live in my homeland. But just last month I, along with the other members of the Ireland-Palestine Solidarity Campaign, was banned by Israel from ever again even visiting my homeland – to see my sister in Gaza, cousins in Hebron, or friends in Bethlehem. This ban is deeply upsetting on a personal level. However, it is also very much a badge of honour – it is a result of the work we do here in Ireland to help achieve freedom for my people. And it shows how our work, particularly our promotion of the Boycott, Divestment and Sanctions – or BDS – campaign is effective in holding Israel to account for its innumerable crimes against my people.

Palestinian civil society has called on internationals to support the BDS campaign and my friends, I believe that together, we Palestinians and our steadfast allies, will end Israeli occupation, colonisation and apartheid – together we will secure freedom, justice and equality, not just for the Palestinian people, but for all peoples struggling against injustice and oppression everywhere. Fatin Al Tamimi with Fidelma Bonass and Elaine Daly, two of the four Irish citizens who were deported by Israel when trying to visit Palestine last year, and former Chairperson of the National Women’s Council of Ireland, Noreen Byrne