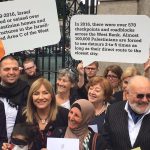 The Ireland-Palestine Solidarity Campaign welcomed today’s Seanad vote (25 in favour, 20 against) in support of Frances Black’s ‘Control of Economic Activities (Occupied Territories) Bill. All parties and most independents in Seanad Eireann, with the exception of the governing party Fine Gael, voted to refer the Bill to the committee stage, the next stage in the process of making a Bill into law. The Bill, if it becomes law, will would prohibit the importation of goods or services from illegal settlements in occupied territories, including Israel’s settlements in Palestine which violate the Geneva Conventions.

(Note: If you haven’t yet thanked politicians for their support, you can do so by clicking here) IPSC Chairperson, Ms. Fatin Al Tamimi, herself a Palestinian-Irish citizen, said: “We in the IPSC and we Palestinians around the world warmly welcome this historic vote, the first its kind in any Western country. Once again, Ireland is making history and leading the way in its solidarity with the Palestinian people. We thank and salute all those Senators and parties who have pledged to support the Bill, and we will be asking the Irish people to ensure that these politicians support its passage at all stages of the lawmaking process.

“The reaction from Israel, and its para-state lobby organisations in Ireland and elsewhere, shows just how vulnerable the apartheid state is to international pressure. It, however, is a shame that Ireland was forced to take this first step alone, as the EU seems more interested in appeasing Israeli colonialism and oppression than in defending the rights of Palestinians. We hope this action will inspire other sympathetic states to take similar measures to help end the seven decades of oppression that my people have endured since the Nakba.

“These have been great months for Palestine in Ireland, a country which punches well above its weight when it comes to solidarity. Aside from the vote on this bill, at least seven local councils[1] have voted to support the Palestinian-led global Boycott, Divestment and Sanctions (BDS) movement, including Dublin, the first EU capital to take this stand, and most recently Mid-Ulster Council and Fermanagh & Omagh District Council. Last month saw the launch of the campaign for an Irish boycott of Eurovision 2019 in apartheid Israel, a call now supported by over 6,000 people, including scores of public figures like Christy Moore, Mary Black, Mike Murphy, Paul Brady, Charlie McGettigan and Carrie Crowley. Meanwhile, barely a week goes by without some form of protest in solidarity with the Palestinian people taking place whether solidarity vigils or protests outside shops selling Israeli products which help fund war crimes. Today is a great day for Palestine, but we cannot rest on our laurels – we must keep pushing for concrete action.

“We would like to pay special tribute to Frances Black and her team for their dedication to this Bill, and our colleagues in Trocaire, Chirstian Aid, the Irish Congress of Trade Unions, and notably Sadaka, especially their Legal Officer Gerry Liston, for all their legal and campaigning work on the issue. Finally, we want to thank each and every person who took time out of their lives to lobby in favour of the bill – your support has seen the bill progress this far, and we know we can count on you to keep the pressure on until it becomes law. We salute you all.