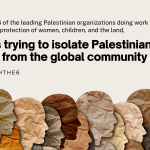 The letter, the full text of which is below,  states that the EU has not done enough to protect these Palestinian groups, calls for a clear rejection of the designation by the EU, and asks the EU to suspend the acceptance of Israel into the highly lucrative Horizon Europe research and development programme.

Aside from the Ireland-Palestine Solidarity Campaign, among the 18 Irish signatories are Trocaire, the Irish Congress of Trade Unions, Unite the Union, UNISON, Sinn Féin, and People Before Profit.

Internationally, signatories include the International Federation for Human Rights, The Rights Forum, Via Campesina, and major trade union confederations in Italy and France.

As organisations based in Europe, we would like to alert you to the extremely serious situation created by the slander of the State of Israel against six of the most important and internationally renowned Palestinian human rights organisations: Addameer Prisoner Support and Human Rights Association, Al Haq – Law in the service of men, Bisan Center for Research and Development, Defense for Children International – Palestine, the Union of Agricultural Work Committees, Union of Palestinian Women’s Committees.

After their classification as “terrorists” on 22 October, and with the subsequent military banning order on 7 November, they are in great danger: their premises may be invaded or closed down, their equipment confiscated, their leaders and staff arrested and their funding is put in danger. The protection services they provide to the Palestinian population, as well as their ability to inform international bodies about human rights violations in Palestine, are themselves jeopardised by this decision. The European Union must remain true to its own values; it must protect them.

The statement by the EEAS Spokesperson on October 28 was not commensurate with the gravity of this threat. By stating that the EU “takes such allegations extremely serious” and by “engaging Israeli authorities for more information”, it gives weight to allegations against partners that the European Union has known perfectly well for years, and it legitimises the idea that the State of Israel would have a legitimate reason to take up the issue. This is doubly false: firstly because these organisations are subject to Palestinian law, and the State of Israel has no business declaring them as unlawful, and secondly because the Israeli leaders who accuse them are the same ones who could be implicated by the ICC procedures, which themselves could be based on the information and investigation files provided by these NGOs.

We therefore ask you first of all for a much clearer public statement on this issue. In particular, we ask you to:

⮚ clearly reject the Israeli allegations and question their legitimacy,

⮚ publicly renew your confidence in these human rights organisations, which are doing  remarkable and indispensable work on the ground,

⮚ formally ask the Israeli government to reverse its decisions to designate and subsequently ban them,

⮚ inform all donors and financial intermediaries of your rejection of the decisions taken by the  State of Israel and of your confidence in the NGOs in question,

⮚ officially receive, at your level, the leaders of these NGOs and assure them of your full  support,

⮚ publicly and financially support the action of the ICC including the case for Palestine.

Beyond this indispensable statement, it is necessary to take action.

The first act that you can take, together with the European Commission of which you are Vice President, concerns the agreement to include Israel in the Horizon Europe research and development programme. While one can imagine that even the simple respect of the July 2013 guidelines was not frankly approved by Israel, the Commission probably wanted to make a “positive gesture” towards Israel by declaring on 18 October that the negotiations were over. We know the result: four days later, the State of Israel launched the most serious offensive in history against Palestinian human rights organisations. A few days later, on 30th October, the Israeli ambassador tore up the report of the UN Human Rights Council at the UN.