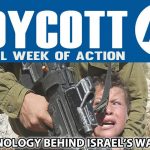 Between 13th and 20th July branches of the Ireland-Palestine Solidarity Campaign around the country will be taking part in the Boycott HP global week of action, calling on HP to end its profiteering from Apartheid Israel’s colonial occupation and oppression of the Palestinian people.

We will be on the streets asking people to boycott Hewlett Packard (HP) and highlighting their complicity and facilitation of Israel’s crimes against the people of Palestine. We will also collect signatures on our ‘Boycott HP Pledge’.

We’ll be hitting the streets in the following locations:

You can find out more about HP’s complicity here.