HP-branded corporations play key roles in Israel’s oppression of Palestinians. They are complicit in Israel’s occupation, apartheid and settler-colonial regime. HPE provides services to the Israeli police and prison services. HP Inc has been involved in providing computers to Israeli occupation forces.

In November 2015, HP split into two companies: HP Inc. for consumer hardware like PCs and printers, and Hewlett Packard Enterprise (HPE) for business and government services.

The campaign to boycott HP was launched to end this complicity and it continues to grow strong. It has a wide range of support from city councils, trade unions, churches, student unions and broad civil society organizations. Over a decade of campaigning, many contracts between HP-branded companies and apartheid Israel have ended, showing that BDS pressure works.

This includes contracts with the Israeli Navy maintaining the siege of Gaza, the Basel System contract of biometric identification used at Israeli military checkpoints, and most recently, the Aviv System contract between HPE and Israel’s Population and Immigration Authority. By providing exclusive servers for maintaining Israel’s population database, including the Yesha database of illegal settlements, HPE was complicit in maintaining a pillar of Israeli apartheid. This contract has now been phased out.

HPE continues to provide services to Israeli prisons and police despite its full knowledge of the grave human rights violations perpetrated by both. This means HP remains complicit in apartheid. Join us for the final push as we escalate our campaigning in solidarity with Palestinian administrative detainees and other political prisoners, to end the remaining contracts between HP-branded companies and apartheid Israel.

HPE and HP Inc’s technology and equipment facilitate Israel’s brutal decades-long military occupation of Palestine and the associated apartheid regime, war crimes and ongoing colonisation. It does this in a variety of ways, especially through its provison of technology to the Israeli police and prisons, and through its past involvement with the Israeli military, Israel’s illegal settlements and military checkpoint regime, and the development of Israel’s biometric system used for population and territorial control and surveillance of Palestinians both inside Israel and in the occupied Palestinian territory.

Until HPE and HP Inc ends their complicity in Israel’s Apartheid regime I will make this pledge:

‘I pledge not to buy Hewlett Packard products, such as printers, computers and ink, because I refuse to be complicit in the oppression and occupation of the Palestinian people.’

Pledge to boycott Hewlett-Packard in solidarity with the Palestinian people

Consent Notice: By signing you agree that a copy of this information (excluding your email address) will be provided to Hewlett-Packard for their information. Aside from this, we do not pass on personal details to any third parties for advertising or any other purposes and your data is securely stored. Should you wish to remove your details from this list, please contact us. 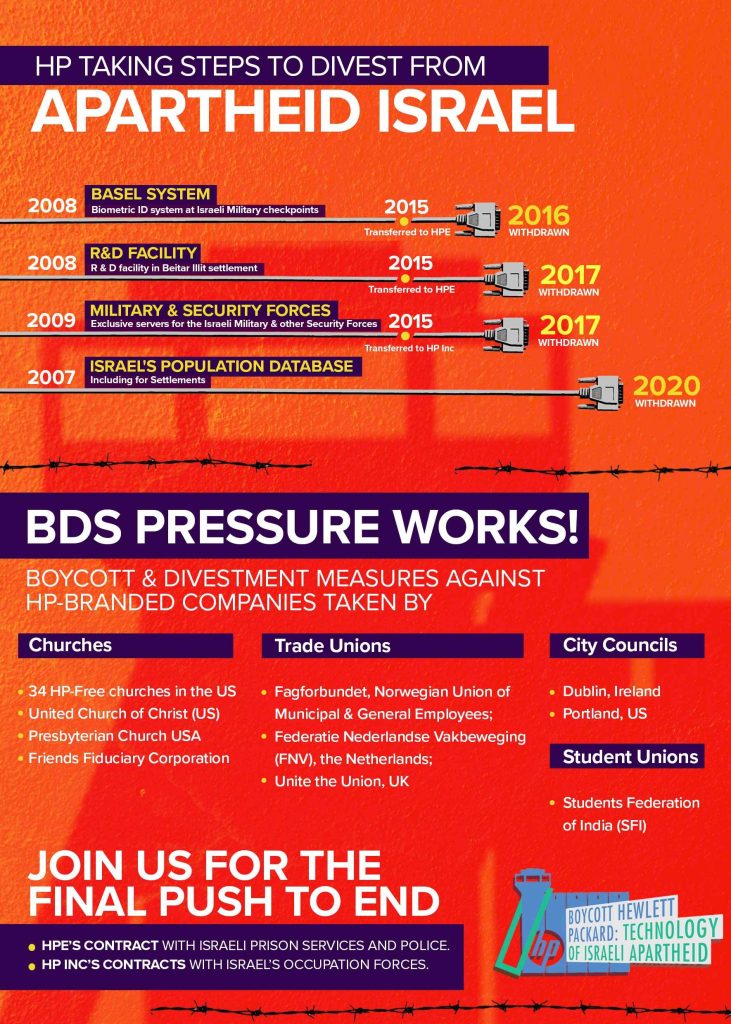