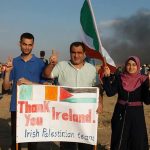 Besieged Gaza—Occupied Palestine—20.7.2018: The Legal affairs and International Communication Committee of the Great March of Return and Breaking the Siege highly appreciates and values the step taken by Seanad Éireann for voting positively on the bill to ban products from illegal Israeli settlements. The committee would like to express sincere appreciation and thanks to Senator Frances Black for proposing and working so tirelessly on this bill; and also to Fianna Fáil, Sinn Fein, the Labour Party, the Green Party and the Independents in Seanad Éireann and would clearly state that their support and solidarity shall not be forgotten. The committee would also like to remind the ruling party, Fine Gael, who opposed the bill, that the Irish people, like the natives of South Africa, within the period of their struggle for freedom and equality were always looking for support from free nations. The Palestinian people would expect the party therefore to stand for values of justice, freedom, and also to support the rule of international law and Palestinian basic rights.

Today, the Israeli Knesset passed a controversial racist law that officially defines Israel as the Jewish nation-state. i.e. an exclusivist Apartheid state, this should invite the world community to treat Israel the same way it did with the apartheid in South Africa, until it abides by the international law. However, such an act could have not been passed if the international community stood firmly with the Palestinian right to self-determination in accordance with United Nations resolutions.

The Legal Affairs and International Communication Committee of the Great March of Return and Breaking the Siege reminds all that Israeli snipers have so far killed 142 and injured 16,496 innocent peaceful protesters since the start of the GRM on 30th March 2018. All we are asking for is to enforce international law by all possible means amongst which is imposing a military embargo and sanctions until Israel abides by the rule of law and respect Palestinian human rights. At the end we shall not forget to say thank you to the Irish people for standing on the right side of history.