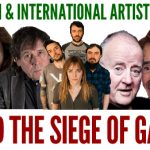 Mary Black, Liam Cunningham, Christy Moore, Stephen Rea, Lankum, Frances Black, Colm Tóibín and over 240 others back Amnesty International’s call for a military embargo on Israel “until it fully complies with its obligations under international law” and for the rights of Palestinian refugees to be upheld.

The full letter can be read at www.liftthesiege.com

Commenting on the letter, Ireland-Palestine Solidarity Campaign Chairperson, Ms. Fatin Al Tamimi thanked the signatories saying “As we Palestinians commemorate the 72nd anniversary of the Nakba this week, it is truly heartening to see so many Irish and international cultural figures call for an end to the cruel and illegal siege of Gaza, for an arms embargo on Israel and for the right of the Palestinian refugee to return. We thank them all for their support and solidarity in these critical times for Palestinians.”

The first cases of coronavirus in blockaded Gaza were reported in March. Palestinian, Israeli and international humanitarian and human rights organisations have called for the lifting of Israel’s siege so that Gaza can address its severe shortages of medical equipment.

“International pressure is urgently needed to make life in Gaza liveable and dignified. Israel’s siege must be ended. And most urgently, a potentially devastating outbreak must be prevented.”

“What happens in Gaza is a test for the conscience of humanity. We back Amnesty International’s call on all world governments to impose a military embargo on Israel until it fully complies with its obligations under international law.”

“We recognise that the rights guaranteed to refugees by the Universal Declaration of Human Rights must be upheld for Palestinians as well. In these times of international crisis, we must stand for justice, peace, freedom, and equal rights for all, regardless of identity or creed. We may be staying at home, but our ethical responsibility shouldn’t.”

The full letter can be read at www.liftthesiege.com