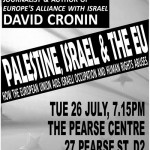 David Cronin (left), and David Landy of the IPSC

On Tuesday 26th July 2011, Irish author, journalist and activist David Cronin gave a talk on the subject of ‘Palestine, Israel and the EU: How the European Union aids Israeli occupation and human rights abuses’.  A crowd of around 50 people packed into the Pearse Centre to listen to the lecture, hosted by the Ireland Palestine Solidarity Campaign.

If you were unable to make it along, you can listen to an audio recording of the talk here:

David Cronin is the author of the explosive book Europe’s alliance with Israel: Aiding the Occupation, a journalist with many online and print publications, and the man who has attempted to make citizen’s arrests of both Tony Blair and Israeli Foreign Minister Avigdor Lieberman. David’s website is http://dvcronin.blogspot.com/