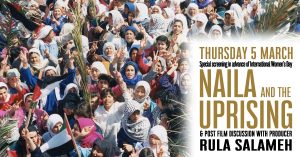 On Thursday 5th March you are invited to a special free screening of the highly acclaimed Palestinian documentary film ‘Naila and the Uprising’ in the Wexford Artist Hun, Creative Mall, Mallin Street, Wexford at 7pm. The film will be followed by a discussion and Q&A with the film’s producer Rula Salameh.