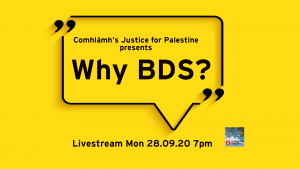 Comhlámh’s Justice for Palestine member group presents this free online event to discuss the international movement of Boycott, Divestment and Sanction (BDS). BDS will be discussed by three well-respected speakers: Fatin al Tamimi, Richard Falk and Omar Barghouti. BDS has been described as the only way to pressure Israel to comply with International Law. The event will be facilitated by group member Diarmuid O Brien, with the panel discussing their work, their views on BDS, and questions from the audience; not to mention being punctuated by Palestinian music and entertainment.

Omar Barghouti is a Palestinian human rights defender and co-founder of the Palestinian-led Boycott, Divestment and Sanctions (BDS) movement for Palestinian rights. He is a co-recipient of the 2017 Gandhi Peace Award. He holds bachelor’s and master’s degrees in Electrical Engineering from Columbia University, NY, and a master’s in Philosophy (ethics) from Tel Aviv University. He is the author of, BDS: The Global Struggle for Palestinian Rights (Haymarket: 2011). His commentaries and views have appeared in the New York Times, the Washington Post, the Financial Times, AP, Reuters, AFP, the Guardian and on BBC, Bloomberg TV, MSNBC, CNN, among others.

Fatin is the chairperson of the Ireland-Palestine Solidarity Campaign. A diaspora Palestinian woman, has been living and raising her family in Ireland for more than 30 years. Her family originally hails from Hebron and Gaza in Palestine, and she still has close relatives living in both areas. She has been involved for many years in Palestine solidarity work in Ireland, and in 2016 she was elected to the position of Chairperson of the IPSC, the first Palestinian to hold the position. She is also active in anti-racist, anti-war and women’s groups in Ireland, and has spoken at many events.

The conversation will be facilitated by group member Diarmuid O Brien.