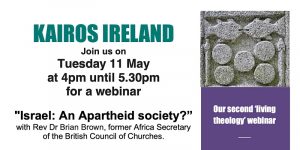 Join Kairos Ireland on Tuesday 11 May at 4pm until 5.30pm for a webinar “Israel: An Apartheid society?” with Rev Dr Brian Brown, former Africa Secretary of the British Council of Churches.

The question that Brian will address is the horror of seeing the Palestinians being violently dispossessed of their land, nationality and human rights by the policies of the State of Israel. He did not believe apartheid could happen again in his life-time and be replicated in another land. What he experienced happening on the ground while living in South Africa’s era of Grand Apartheid (1960-90) was the reality of one ethnic group taking the land, human rights and nationality of another through violent conquest and occupation in violation of international law.

Brian was part of the confessing church movement of the Christian Institute who, along with Rev Beyers Naudé, lived through those difficult years. He opposed the policies of South African Apartheid from a strong theological standpoint and was banned (house arrest) for many years. He calls on all Christians at congregational and denominational levels to engage in a process of confession concerning the systematic deprivation of the rights of the Palestinian people, and how the Bible has been used by many to justify and support this oppression.

Rev Brian Brown is a Methodist minister and came to England as a refugee from apartheid South Africa in 1978 following the regime’s imposition of a banning order. He initially worked in the Denby Dale & Clayton West Circuit, near Huddersfield. He then became Africa Secretary for the British Council of Churches during the 1980s before taking up a teaching position at Kingsmead College in Birmingham which prepared people for working overseas. This was followed by a lengthy period in the Methodist World Church Office in London with responsibility for African affairs.

He acted as a consultant to Kairos South Africa when they produced their document, that subsequently became a model for Kairos Palestine. He is now retired but not given up interest in world affairs and how the apartheid mindset affects the Holy Land.