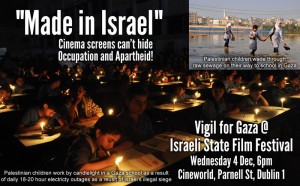 The Israeli Embassy in Ireland will be hosting a state-sponsored ‘Made in Israel’ film and television festival. In line with the Palestinian call for a cultural boycott of Israel, the Ireland-Palestine Solidarity Campaign will hold a silent vigil for Gaza outside the ‘gala opening’ at Cineworld on Parnell Street, Dublin 1 from 6pm – 7.30pm on Wednesday 4th December.

“We see culture as a propaganda tool of the first rank, and … do not differentiate between propaganda and culture.” – Nissim Ben-Sheetrit,  Deputy Director General, Israeli Foreign Ministry, 2005

The Israeli Embassy has billed the opening as a “Hanukkah Reception” in a cynical attempt to link this whitewashing exercise to the Jewish religion. Ironically Hanukkah is the Jewish festival of lights, and the ‘gala opening’ of this festival takes place at a time when the lights are off in Gaza, where people have been surviving without electricity for up to 20 hours per day for more than a month as a result of the illegal Israeli siege and the closure of tunnels by Egypt. This man-made crisis, in the words of Amnesty International, has “compounded [the Israeli] blockade’s assault on human dignity”. Power outages have led to horrendous scenes in Gaza, including children walking to school through raw sewage as the pumping plants are inoperable.

Amnesty further notes that “the occupying power, Israel, has the primary responsibility for addressing the current crisis by immediately increasing fuel supplies to Gaza. It must also address the long-term crisis by completely lifting the blockade, including by allowing fuel into Gaza without restrictions, allowing construction materials and equipment necessary for repairing and maintaining vital infrastructure, and increasing electricity supplies to Gaza by facilitating the construction of new power lines”.

Sadly, the ‘gala opening’ will see the Minister for Arts, Heritage and the Gaeltacht Jimmy Deenihan in attendance on behalf of the Irish government. The IPSC is deeply concerned that  instead of holding Israel accountable for its criminal acts against Palestinian, Irish and other citizens and its illegal practices in the territories it illegally occupies and/or besieges, the Irish government will allow one of its representatives to help whitewash this apartheid state.

The Israeli Ambassador states in the festival programme that in “presenting a varied selection of Israeli films, we hope that audiences in Ireland will become better acquainted with the reality of life in Israel rather than the distorted image, which is often portrayed in the media.”

However, by failing to show a single film that deals with the issues of Israel’s occupation of Palestinian territories, its illegal siege of Gaza, and the discrimination perpetrated against Palestinian citizens of Israel (in particular the Bedouin who, under the Prawer Plan, are to be subject to massive internal displacement), this festival is itself presenting an image of Israel so distorted as to amount to propaganda by omission.

Undoubtedly, some people will oppose our protest by claiming that “culture is above politics”. To this, apart from saying that “culture is political whether you want it to be or not”, we would respond that on top of the fact that this event is hosted by the representatives of the Israeli state in Ireland (it doesn’t get much more political than that), this festival also includes a number of ‘political’ films and a very political discussion on Ireland, Palestine and Israel. Meanwhile the brochure for the event features an advert for the anti-Palestinian group Irish4Israel.

Finally we ask people to remember the words of former Deputy Director General of the  Israeli Foreign Ministry, Nissim Ben-Sheetrit, who in 2005 told Haaretz that “we see culture as a propaganda tool of the first rank, and … do not differentiate between propaganda and culture.”

Note that a previous version of this text indicated that “a leading member of [Irish for Israel] is on record as saying that the destruction of the Muslim Dome of the Rock in Jerusalem is their ‘dream’ and who believes that Muslims ‘must be destroyed or at least driven out’ of Palestine and Israel”. It has been clarified, by Mr. Barry Williams (a leading member of Irish4Israel) on behalf of Irish4Israel, that this information is incorrect. According to Mr. Williams, what he calls the “outrageous comments made by Naomi Gibson on Facebook” are not to be associated with the views of Irish4Israel. Mr Williams confirmed that “Naomi Gibson is NOT a member of irish4Israel let alone a ‘leading’ member. Nor has she ever been.”

As we strive for accuracy in content, the IPSC is happy to issue this clarification and to apologise unreservedly for our initial error.

By way of explanation, our honestly held belief that the named person (i.e. Ms Gibson) was a “leading member” of Irish4Israel arose from the fact that Ms Gibson was apparently one of the organisers of an “Emergency Peace for Israel Rally” in November 2013 following Israel’s eight day bombardment of Gaza which left over 160 people dead. This rally was promoted online by the Irish4Israel group as being an event organised by that group. Therefore it is easy to see from whence our honestly held opinion derived. Mr Williams clarification is welcomed.