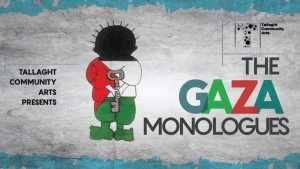 In 2010 thirty-three young people in the Gaza Strip, Palestine believed that they had a voice other than the cries of fear as planes bombarded them day and night. Their collective voice said; “Enough! We deserve a world without fear, siege or occupation.”

They developed a script from their personal responses. The Gaza Monologues have been presented by young people in 40 countries.

Gaza is still under siege – the Israeli occupation more brutal than ever;

For more details and to book tickets see here.