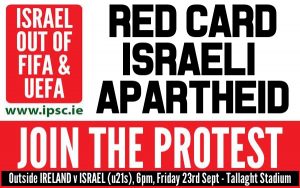 The Ireland-Palestine Solidarity Campaign (IPSC) will hold a peaceful protest at the Ireland vs Israel Under-21s match in Tallaght Stadium on Friday 23rd September. The protest starts at 6pm and will take place outside the stadium. We will be highlighting the BDS call for the expulsion of the Israeli FA from FIFA and UEFA due to Apartheid Israel’s ongoing human rights abuses against the Palestinian people, including Palestinian sportspeople.

The protest will be an act of solidarity with the people of Palestine who have suffered so much, and continue to suffer daily, at the hands of the Israel’s apartheid regime. Outside the stadium banners reading, ‘Love Football, Hate Apartheid’ and ‘Boycott Israeli Apartheid’ will be displayed alongside Palestinian flags.

The protest will call for such a sporting boycott of Israeli football teams due to the Apartheid nature of the Israeli State, the ongoing occupation of Palestine and the continual denial of rights to the Palestinian people. The Palestinian Campaign for the Academic and Cultural Boycott of Israel (PACBI) have confirmed that this game falls under their Boycott, Divestment and Sanctions (BDS) guidelines.

While some people may suggest that sports and politics shouldn’t mix, we believe there is no place in sport for racism or teams who act as ambassadors for racist or apartheid states. FIFA and UEFA themselves certainly believe that sport and politics mix, having expelled the Russian Football Association four days after the Russian military invaded Ukraine in February.

As Mahmoud Sarsak, the rising Palestinian football star who was abducted on his way to training, imprisoned for three years without charge or trial by Israel, and who only won his freedom after a career-ending 96 day long hunger strike, has said: “There can be no place in football for segregation and oppression … I call on all those who spoke out for my release and the release of the Palestinian hunger strikers, to once again show their commitment to justice and equality by insisting that UEFA move their competitions away from Israel [and supporting] the cultural and sporting boycott and other forms of boycott, divestment and sanctions. [These] were vital in the fall of the South African apartheid regime, and similar initiatives will be vital to ending Israeli apartheid.”