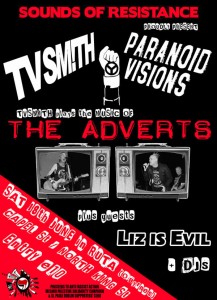 Legendary Punk Acts Together in Dublin this June

Saturday 18th June sees the return to these shores of TV Smith, co-founder of 70’s British punk legends The Adverts. The Adverts, who in their time shared the stage with The Damned, The Jam and Generation X, were pioneers of a burgeoning late seventies British punk scene, and led the way with anthems like “Bored Teenagers,” a song whose lyrics, “We’re just bored teenagers. Looking for love, or should I say emotional rages”, ring true now, just as they did 35 years ago, and the controversial “Gary Gilmore’s Eyes,” a song about an executed American convict.

Also on the bill are Dublin punk stalwarts Paranoid Visions, still going strong after close to twenty nine years, and and relative newcomers Liz Is Evil. While both TV Smith and Paranoid Visions will be playing their own sets, there are plans afoot for collaboration wherein the two legendary acts collide and a concoction of The Adverts with a very definite Dublin twist will take the stage.

The gig is being promoted by “Sounds of Resistance,” who have been organising events since June 2010. The organisation is backed by three very different groups, the Ireland Palestine Solidarity Campaign, Anti- Fascist Action Ireland and the Dublin St. Pauli Supporters Club. All proceeds from the gigs are shared amongst all three, the DSPSC sending their money across to their sister organisation in Hamburg to contribute towards creating displays against sexism, homophobia and racism in the Millerntor Stadium.

The gig takes place in O’Byrnes / Ruta (formerly the Four Seasons) on the junction of Capel Street and North King Street, home to Sounds of Resistance and the Dublin St. Pauli Supporters Club.

Cover charge is €10, payable on entry to venue.