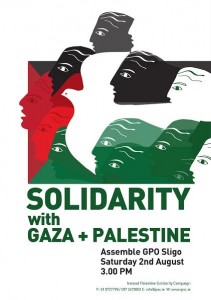 A vigil and demonstration to protest against the continued Israeli attacks on Gaza and to express solidarity with the people of Palestine will take place outside Sligo’s G.P.O. on Saturday afternoon next the 2nd of August at 3pm.

Calling for support for the protest Ms Tracy Walsh of the Ireland Palestine Solidarity Campaign said “The people of Sligo turned out in large numbers for the demonstration in solidarity with Gaza two weeks ago and we are hopeful that this Saturdays event will receive similar support.

“Ordinary people are horrified by the collective punishment inflicted on the people of Gaza by Israel. Over 1,000 Palestinians have been killed, huge numbers have been injured and 140,000 have been displaced. Homes and hospitals have been bombed as well as educational institutions including the United Nations Refugee Agency School – a school designated by the UN as a shelter for people displaced by Israel’s assault.

“The UN Human Rights Commissioner has said Israel should be investigated for war crimes. It is important that we in Ireland express our sympathy, solidarity and support to all those affected by the Israeli attacks.” Ms Walsh said.