[Shannon] Weekend of Peace Events Planned for Shannon in October 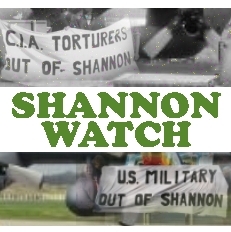 Shannonwatch are inviting groups and individuals around the country to join them in organising a series of peace events at Shannon Airport on the weekend of October 11th and 12th. The main event of the weekend will be a public demonstration on Sunday 12th at 2pm, calling for an end to the US military use of the airport

Musicians, photographic and other artists are invited to use the estuary and other public spaces to show their disgust at the airport’s 13 years of involvement in renditions, weapons transportation and global warfare.

The event is being co-organised by Shannonwatch, Galway Alliance Against War, the Peace and Neutrality Alliance (PANA), the Irish Anti-War Movement (IAWN) and the Ireland Palestine Solidarity Campaign (IPSC).

October will mark the 13th anniversary of the unjustified US invasion of Afghanistan in 2001. Ireland and Shannon supported that invasion despite the country’s proud record of neutrality. This support for unilateral declaration of war at the start of the last decade was continued when Shannon facilitated the illegal invasion of Iraq in 2003. That invasion caused hundreds of thousands of deaths and led to the current violent situation that exists in the country.

Since 2001, almost 2.5 million troops and their weapons have passed through Shannon. Today, the airport continues to be used as a US military hub, with troop carriers landing most days of the week. Cargo planes licensed to bring munitions from the US land regularly. Some of these may have been used to supply ammunition used by Israel to commit war crimes in Gaza.

The current Irish government and the Shannon Airport authorities have said they are in favour of additional military flights. That, and the recent decision to allow US fighter jets to fly over Dublin as part of an American football event at Croke Park, shows that Ireland is edging closer to full involvement in the military axis of the US, NATO and the EU. This goes against the wishes of the majority of Irish people, and is likely to drag us deeper into unnecessary conflicts in places like the Ukraine.

There is no legal, moral or economic justification for the continuing involvement of Shannon in global warfare. On October 12th we are calling for an end to Ireland’s shameful role in military aggression, starting with an end to the US military use of the airport.

It is time to reclaim our neutrality, to start promoting peace, and to demand respect for human rights and justice.

For more information visit www.shannonwatch.org. You can also email shannonwatch@gmail.com or phone 087 8225087.