Public Meeting with John Reynolds: The Palestinian Statehood Bid… What does is mean for the Palestinians’ human, national and democratic rights? 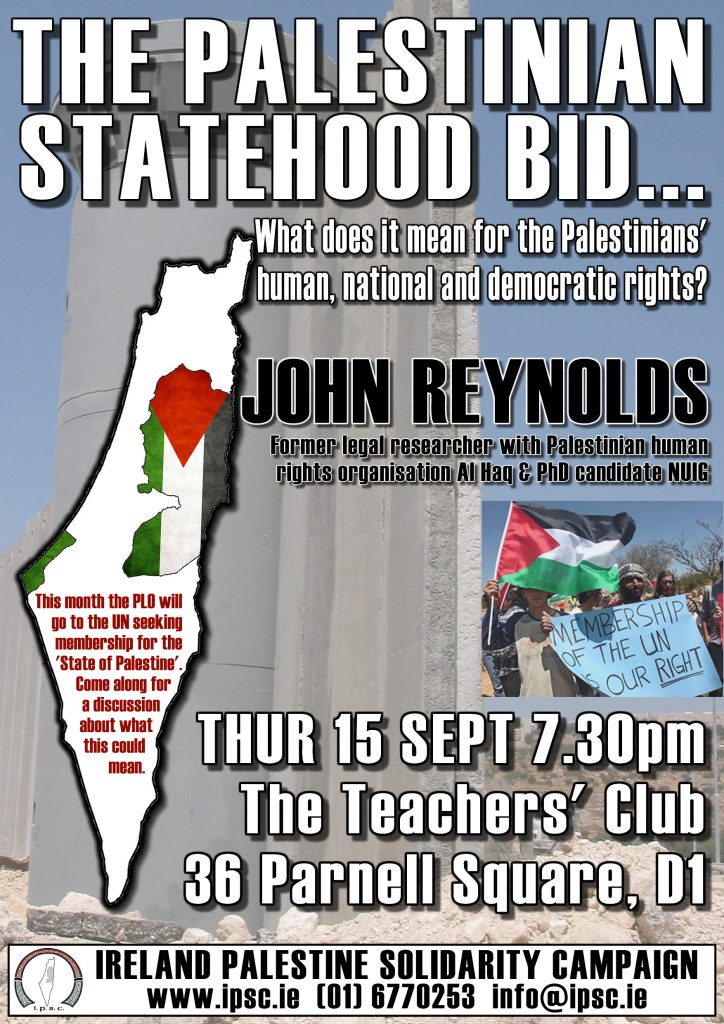 This month the Palestine Liberation Organisation (PLO) will go to the UN seeking membership for the ‘State of Palestine’, based on the pre-1967 borders with East Jerusalem as its capital. This initiative, which is supported by many Palestinians and solidarity groups, but also opposed – or at least viewed with circumspection – by others, has generated much discussion in the media and amongst activists.

The Ireland Palestine Solidarity Campaign is proud to host a discussion on this important issue, and its potential implications – both positive and negative – for the Palestinian people’s struggle against occupation and for their inalienable human, national and democratic rights.

Our guest speaker will be John Reynolds, a former legal advisor for the Palestinian human rights organisation Al-Haq and currently a PhD candidate at the Irish Centre for Human Rights in NUI Galway. He has written extensively on international law and human rights in the Palestinian context, and will present a balanced view of the PLO’s attempt to gain recognition for a Palestinian state. John will give a presentation and will answer questions during the discussion.

The IPSC invites you to come along and take part in this important discussion on Thursday 15th September, at 7.30pm in The Teachers’ Club (Room 6), 36 Parnell Square, Dublin 1.