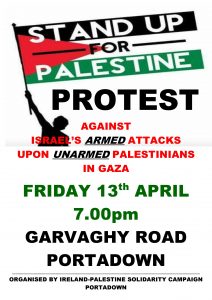 On Friday, March 30, tens of thousands of Palestinians in Gaza took part in the Great March of Return to Israel’s apartheid separation barrier that has kept more than 2 million people imprisoned for more than a decade.

The march, organized by a cross section of organisations with Palestinian civil society, called for an end of the Gaza’s brutal siege and the right of return for Palestinian refugees. Conditions in Gaza are currently “unliveable,” as described by the United Nations, with severe electricity shortages and water contamination, on top of periodic military assaults by Israeli forces.

The Israeli army claimed online on March 30 that, “Nothing was carried out uncontrolled; everything was accurate and measured, and we know where every bullet landed.”

And yet, tens of thousands of Palestinians remain steadfast.

On Friday March 6, they again marched in their thousands to the Israeli-imposed apartheid separation barrier. They aim to do this until May 15, the 70th anniversary of the “Nakba,” Arabic for “catastrophe,” when 750,000 Palestinians were forcibly expelled from their homes for the creation of the state of Israel.

Again, on Friday, the Israeli military opened fire on the unarmed demonstrators, shooting dead 10 of them, including a news journalist and two children. 451 other Palestinians were injured by live-fire from the Israeli troops. Hundreds more were injured by so-called rubber-bullets while many were affected by tear-gas.

We condemn these killings. We mourn those Palestinians who were killed.

Next Friday, April 13, thousands more unarmed Palestinians will again march to Israel’s apartheid separation barrier. Without any doubt, the Israeli state will again use unjustifiable and lethal force against them.

Also next Friday, April 13, we are organising a protest at 7.00pm at Garvaghy Road to show solidarity with the people of Gaza and with all Palestinians.

Join with us and show that you stand with all those Palestinians in Gaza in this historic new wave of organizing and their quest to return home to the lands from which they were forcibly expelled.