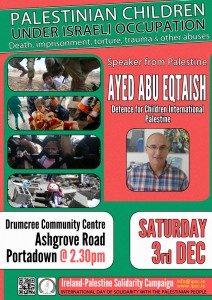 To commemorate the annual International Day of Solidarity With the Palestinian People 2016, the Ireland-Palestine Solidarity Campaign (IPSC) is honoured to host Ayed Abu Eqtaish from Defence For Children International in Palestine.  Mr. Abu Eqtaish will speak on Saturday 3rd December in Drumcree Community Centre, Ashgrove Road, Portadown at 2.30pm.

Hosted by the Portadown branch of the Ireland-Palestine Solidarity Campaign to commemorate the annual International Day of Solidarity With the Palestinian People 2016.