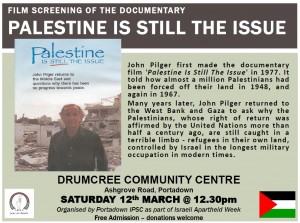 FILM SCREENING OF THE DOCUMENTARY PALESTINE IS STILL THE ISSUE

John Pilger first made the documentary film ‘Palestine Is Still The Issue’ in 1977. It told how almost a million Palestinians had been forced off their land in 1948, and again in 1967.

Many years later, John Pilger returned to the West Bank and Gaza to ask why the Palestinians, whose right of return was affirmed by the United Nations more than half a century ago, are still caught in a terrible limbo – refugees in their own land, controlled by Israel in the longest military occupation in modern times.