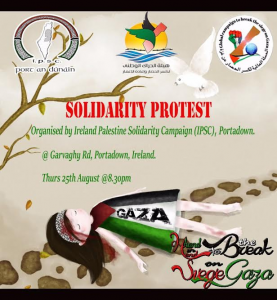 In response to a direct appeal received yesterday from a women’s co-operative group in the Khan Younis area of Gaza in the aftermath of Sunday’s Israeli airstrikes and bombardment on the besieged region, Portadown IPSC will be holding a solidarity vigil on Thursday 25th August at Garvaghy Road at 8.30pm.

Portadown IPSC have been supporting the women’s project in Khan Younis for the past two years.
Tomorrow evening’s event will highlight the ongoing siege and blockade of Gaza by the Israeli state.
Share this!
This site uses cookies: Find out more.