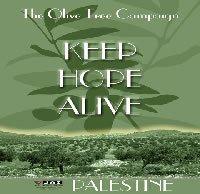 The YWCA-YMCA Joint Advocacy Initiative (JAI) and the Alternative Tourism Group (ATG) would love to invite you to the 7th Olive Planting Program 2014 in Palestine, from 8th (arrival) – 17th (departure) February.

A program for Civil International Solidarity with Palestinians, as part of the JAI ongoing Keep Hope Alive – Olive Tree Campaign, to help Palestinian farmers and their families plant olive trees in their threatened fields.

Besides olive planting, the program features introductory presentations about the current situation in Palestine and the effects of the Apartheid Wall, tours in the old city of Jerusalem, Hebron, Bethlehem, as well as Ramallah, in addition to cultural events and social gatherings.

You are all encouraged to pass the word about this event to people who might be interested come to Palestine and to participate.

For any other information, questions, concerns, or to request a registration form, please contact:

Disrespecting its’ religious, cultural, natural, nutritious and economic value, the olive tree has been a constant target of the Israeli military occupation under the guise of security, the construction of the Wall on Palestinian lands and the continuous expansion of Israeli – Jewish only – colonies (settlements).

The destruction of olive trees has had intentional and destructive results on the lives of many Palestinian farmers, land owners and the Palestinian population in general.

For these reasons and many others, the Olive Tree Campaign was launched in 2001 as a positive response to systematic destruction by addressing the needs of the effected farmers. The Olive Tree Campaign uses the olive tree as a tool to advocate for the Palestinians right to peace with justice. So far, 11 seasons of planting have helped hundreds of Palestinian farmers and brought awareness to the expanding international network of friends and partners about the real life of the Palestinians who have been striving for peace with justice for more than 65 years.

Looking forward to seeing you in February!