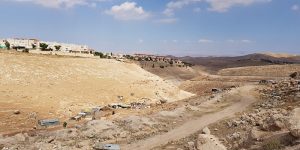 The meeting will take place on Thursday 25th March at 7pm on Zoom. You need to register here.

In June of last year, 47 UN human rights experts called for urgent action from the international community to prevent the proposed Israeli annexation of large parts of the occupied Palestinian West Bank.

They warned that Israeli Prime Minister Netanyahu’s flagship plan to formally annex approximately 30% of the territory would leave behind a “Palestinian Bantustan, islands of disconnected land” cutting people off from each other and the outside world. More gravely, it would represent “the crystallisation of an already unjust reality: two peoples living in the same space, ruled by the same state, but with profoundly unequal rights. A vision of a 21st-century apartheid.”

In July, amid increasing international pressure, these annexation plans were put on hold. But many have argued that widespread relief at this postponement does not reflect reality on the ground – that in practice, after over 50 years of occupation, the land has already been effectively and slowly annexed. Decades of demolition, dispossession and the construction of ever more settlements have brought a system of entrenched discrimination between Israelis and Palestinians, with serious implications for equality and human rights.

Please join us for a discussion of these issues by two of Israel & Palestine’s leading and most respected human rights organisations, Al-Haq and B’Tselem, moderated by Irish journalist and Euronews correspondent Shona Murray. The event is co-hosted by Christian Aid Ireland and Trócaire, who have worked to oppose injustice and support some of the poorest communities in the region for decades.

Hagai El-Ad is Executive Director of B’Tselem בצלם بتسيلم, the Israeli Information Center for Human Rights in the Occupied Palestinian Territories. Previously he was director of the Association for Civil Rights in Israel (ACRI, 2008–2014) and the Jerusalem Open House for Pride and Tolerance (JOH, 2000–2006). In 2014, El-Ad was among Foreign Policy’s “100 Leading Global Thinkers”. In 2016 and again in 2018, he spoke before the United Nations Security Council calling for international action in order to end the occupation. He lives in Jerusalem and tweets at @HagaiElAd.

Shawan Jabarin is General Director of Al-Haq, an independent Palestinian human rights organisation establish in 1979 to protect and promote human rights and the rule of law in the Occupied Palestinian Territory (OPT). The organisation has special consultative status with the United Nations Economic and Social Council and documents violations of the individual and collective rights of Palestinians in the OPT, irrespective of the identity of the perpetrator. Shawan is also Secretary-General of the International Federation for Human Rights (FIDH), a member of the Middle East Advisory Board of Human Rights Watch, and was Amnesty International’s first Palestinian Prisoner of Conscience.

Shona Murray is Europe Correspondent with Euronews. Previously she was Political Correspondent with the Irish Independent and Foreign Affairs correspondent with Newstalk. She’s currently specialising in Brexit. Shona has reported from dozens of countries with a particular focus on Israel/Gaza and the wider Israeli/Palestinian conflict. She’s also reported from Iraq, Turkey/Syria border, Democratic Republic of Congo, South Sudan, Haiti and Guantanamo Bay.