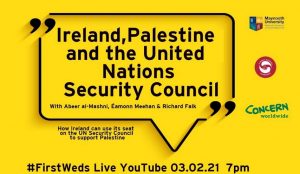 Join Comhlámh and the Department of International Development in Maynooth begin their 2021 season of #FirstWeds.

This month’s discussion will look at how Ireland can use its seat on the United Nations Security Council to support Palestine?

We are delighted to be joined by:

Abeer al-Mashni:
Abeer is an expert in the field of development and policy formulation in Palestine. She has worked for the Prime Minister of Palestine in charge of development projects in Area C in the West Bank. She has ensured effective support to the Prime Minister’s Office in the planning and design of strategies, programs, and interventions in the West Bank. She was responsible for drafting the government Policy Framework for Area C in the West Bank. Ms. Mashni has 20 years of experience in education, state building and local government. Currently, Ms Mashni works as Social Safeguards Specialist at the World Bank office in Jerusalem providing support to the development and planning of the Bank’s operations in Palestine.

Richard Falk:
Richard is the Chair of Global Law at Queen Mary University London and Professor of International Law Emeritus at Princeton University. Falk is the author of This Endangered Planet (1971); A Study of Future Worlds (1975) On Humane Governance (1995); Power Shift (2017); Revisiting the Vietnam War (2017); Palestinian Horizon (2017); and On Nuclear Weapons (2019). Between 2008 & 2014, Falk was appointed as UN Special Rapporteur for Occupied Palestine, Human Rights Council. Since 2009 Falk has been nominated annually for the Nobel Peace Prize.

Éamonn Meehan
Éamonn Meehan was Director of Trócaire from 2013 to 2018 and Deputy Director from 2002 to 2013. Éamonn has recently completed a master’s in International Human Rights Law at the Irish Centre for Human Rights at NUIG.