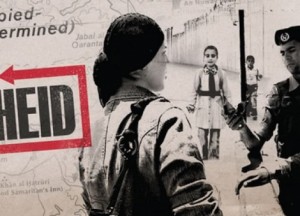 As part of Israeli Apartheid Week 2015 we will be screening the documentary ‘Roadmap To Apartheid’ in the Community House on Thursday 12th March at 7:30pm.

There are many lessons to draw from the South African experience of Apartheid relevant to conflicts all over the world. Roadmap to Apartheid explores in detail the apartheid comparison as it is used in the enduring Israel-Palestine conflict. As much an historical document of the rise and fall of apartheid, the film shows us why many Palestinians feel they are living in an apartheid system today, and why an increasing number of people around the world agree with them.

Organised by the Omagh branch of the IPSC.