[Omagh] Film Screening: On the Side of the Road + Q&A with Director Lia Tarachanksy (IPSC) 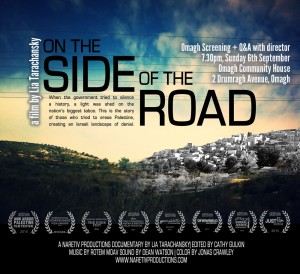 The Ireland-Palestine Solidarity Campaign is proud to host a premiere screening of the award-winning ‘On the Side of the Road’ by Israeli director Lia Tarachansky on Sunday 6th September 2015, at 7.30pm in Omagh Community House, 2 Drumragh Avenue, Omagh.

Organised by the Omagh branch of the Ireland-Palestine Solidarity Campaign.