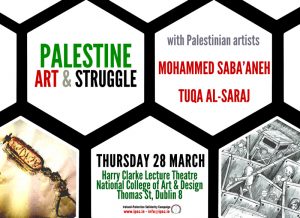 NCAD students are invited to come to meet and hear from two Palestinian artists, Mohammad Sabana’aneh and Tuqa Al Saraj who will be discussing their work and the difficulties surrounding being an artists in and from Palestine. It will be a unique opportunity to discuss first hand with artists whose lives and work have been shaped by growing up under Israel’s occupation.

Mohammad was born and lives Ramallah in occupied Palestine.  He is a Palestinian painter and caricaturist who has been imprisoned by Israel for his art. He has a daily cartoon in the Palestinian newspaper al-Hayat al-Jadida and his work is published in publications across the Arab world. Saba’aneh is the Middle East representative for Cartoonist Rights Network International and the Palestinian ambassador for United Sketches, an international association for freedom of expression and cartoonists in exile. Sabaaneh is the recipient of numerous awards, including the 2017 Marseille International Cartoon Festival Prix d’Or. He lives in Ramallah, Palestine. He has been described by Pulitzer winning cartoonist Matt Wuerker as “an inspiration for cartoonists around the world.” Noted graphic journalist Joe Sacco has said of this work that it is a “gut punch that gets straight to the essence of the stark reality of Palestinian life under Israeli occupation.”

Tuqa Al-Sarraj was born in 1993 in Gaza, and lived in Ramallah. She is an artist and activist who is today based in Dublin. Her work mainly focuses on political, cultural and social issues through her personal experiences and memories. Her work was presented at MISA (2019); LIT (2018); IAAP (2017); Centre social, Georges Brassens (2016); Goethe Institut (2016); copy room studio (2016); KHiO (2015). Sarraj Studied at (IAAP) The International Academy of Art Palestine and is now studying Fine Art in NCAD.