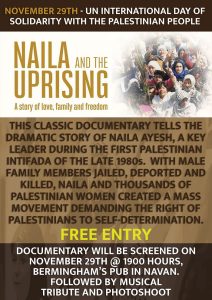 To mark International Day of Solidarity with the Palestinian People 2022, join the Meath branch of the Ireland-Palestine Solidarity Campaign for a special screening of the inspiring Palestinian documentary, Naila and the Uprising.