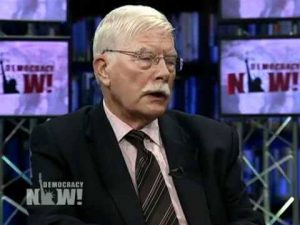 At this talk on Tuesday 26 February 2019 at 8pm in Naas Town Hall Desmond Travers will speak about aspects of the investigations of crimes of war instancing events he has investigated in Palestine, the Yugoslav civil war, the Sri Lankan Tamil war and other conflicts.

Desmond Travers is a former Irish soldier and is currently Vice-President of the Institute for International Criminal Investigations (www.iici.global). Based in The Hague, the Institute is the sole means available to teach and advise into the investigation of crimes of war and genocide.

His military expertise is sought and he has been military adviser and analyst into such conflicts as: the Sri Lanka – Tamil war (2009), events during the Bolivian Presidency of 2002 and the Israel – Hisbollah conflict in S. Lebanon (2006). Additionally his services have been sought relating to events in Syria, Libya, the West Bank, Sudan and on the high seas (MV Marmara incident 2012).

In 2010 he was appointed to the UN Fact-finding Mission into the Israeli forces attacks in Gaza in 2009. The Mission’s finding has come to be known as the Goldstone Report after its Chair Justice Richard Goldstone.

Organised by the Kildare branch of the Ireland-Palestine Solidarity Campaign.