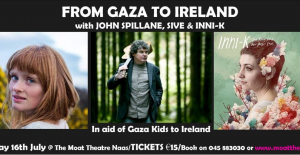 In association with Kildare / Newbridge branch of the Ireland-Palestine Solidarity Campaign an event titled From Gaza to Ireland is coming to The Moat Theatre on Saturday 16th July at 8pm with a night of music from John Spillane, Sive & Inni-K in aid of Gaza Kids to Ireland. Tickets cost €15 and can be booked here.

Here’s what to expect on the evening:

“I got a full-time permanent and pensionable job on my 18th birthday as a bank official in the Bank of Ireland. Two years later I left that job to become a full-time professional musician. My mother nearly killed me.”

33 years on and Cork-born John Spillane has become one of Ireland’s best-loved songwriters, musicians and broadcasters. He has earned a fine reputation as a songwriter, equally at home writing songs for himself or for others to sing – most notably, his songs have been covered by many other well-known names such as Christy Moore, Sean Keane, Mary Black, Méav, Sinéad Lohan, and Sharon Shannon.

Naas native Sive is a songwriter, singer and multi-instrumentalist with a voice that “sweeps along displaying folk and jazz influences with the confidence of one who knows” (Eamonn Carr). Her unique sound weaves together her love for the craft of songwriting with her enthusiasm for experimentation and intricate arrangements.  She recently ran a successful crowdfunding campaign to complete her second studio album which will be released in the autumn.

“Like people such as St. Vincent and James Vincent McMorrow, Inni-K is one of those rare singers that will impress almost anyone with even a passing interest in music.”   – Dan Hegarty, 2fm, 2XM

Singer, multi-instrumentalist & songwriter Inni-K has received consistent praise for her distinct, fresh style of indie-folk since the release of her acclaimed debut album ‘The King has Two Horse’s Ears’ in 2015. Her transcendent voice, set off with tight musicianship and captivating stage presence is steadily carving a name for Inni-K as one of Ireland’s most exciting innovative female singers.

If you would like to learn more about the charity head to any of the links below. If you want to book a ticket check out www.moattheatre.com or give the theatre a call on 045 883030