[Limerick] Solidarity with the Palestinians in Yarmouk refugee camp (IPSC) 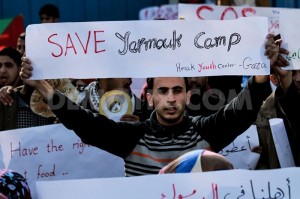 Thousands of civilians are in “immediate danger” and must be evacuated from “completely dire” conditions following ISIS’ attack on the refugee camp, a U.N. official said on Tuesday. Unwra official, Chris Gunness, said: “The situation in the camp is beyond inhumane.” Yarmouk refugee camp is home to Palestinians ethnically cleansed from their homes by Israel, their right of return is enshrined in international law, repeatedly so in UN resolution 194.
Some 18,000 Palestinian civilians are trapped with limited food and water in the Yarmouk camp near Syria’s capital, caught between government forces and duelling rebel groups. Their already-tenuous situation, being under siege for years, deteriorated sharply last week when ISIS launched a push to seize control of the camp from rival armed groups there.