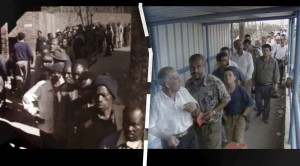 As part of PalFest Ireland, a series of cultural events organised by cultural workers in Ireland to commemorate the start of Israel’s attack on Gaza last July, Limerick IPSC (Ireland-Palestine Solidarity Campaign) is screening Roadmap to Apartheid on Wednesday 8th July at 8pm in Pery’s Best Western Hotel, Glentworth St.
There will be a Q and A afterwards with local activists.

In this award-winning documentary, the first-time directors take a detailed look at the apartheid analogy commonly used to describe the Israeli-Palestinian conflict.
Narrated by Alice Walker (author of The Color Purple), Roadmap to Apartheid is as much a historical document of the rise and fall of apartheid in South Africa, as it is a film about why many Palestinians feel they are living in an apartheid system today, and why an increasing number of people around the world agree with them.

While not perfect, the apartheid analogy is a useful framework by which to educate people on the complex issues facing Israelis and Palestinians. Our film delves into those issues, comparing the many similar laws and tools used by both Israel and apartheid-era South Africa. The audience will see what life is like for Palestinians in the West Bank, Gaza Strip and inside Israel while gaining a deeper understanding of the conflict with the help of respected analysts on the subject. Combined with archival material and anecdotes from South Africans, the film forms a complete picture as to why the analogy is being used with increasing frequency and potency.

“Roadmap To Apartheid is very powerful and compelling, and the visuals of house demolitions are appalling. Religion is repeatedly misused by politicians. Yet one of the lessons of Jewish history is that God is always on the side of the oppressed. Another is that those who dehumanize others, dehumanize themselves. Israelis will pay a heavy price for their callous mistreatment of Palestinians.”

“Roadmap to Apartheid is a harrowing exposé of Israel’s unique system of official discrimination.”