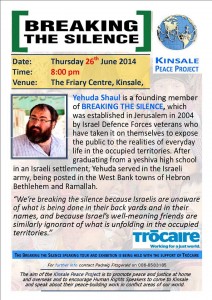 The Kinsale Peace Project in conjunction with Trocaire presents an interesting and insightful presentation in The Friary Centre, Kinsale, Co. Cork on 26th June at 8pm.

Yehuda Shaul is a founding member of Breaking the Silence, which was established in Jerusalem in 2004 by Israeli military veterans who have taken it on themselves tro expose the public to the realities of the everyday life in the occupied territories. After graduating from a yeshiva high school in an Israeli settlement, Yehuda served in the Israeli army, being posted in the West Bank towns of Hebron, Bethlehem and Ramallah.

There will be an opportunity for questions and discussion.

“We’re breaking the silence because Israelis are unaware of what is being done in their back yards and in their names, and because Israel’s well-meaning friends are similarly ignorant of what is unfolding in the occupied territories.”

Organised by The Kinsale Peace Project and Trocaire.