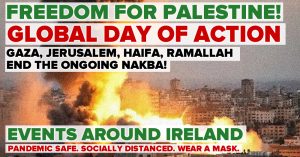 Saturday 22nd May is a Global Day of Action in solidarity with the Palestinian people. Pandemic-safe, masked and socially distanced solidarity events are being organised throughout Ireland. Below are some of the ones that we are aware of.

(Note that not all of these events are organised by the IPSC, and speakers do not necessarily reflect the views of the IPSC)