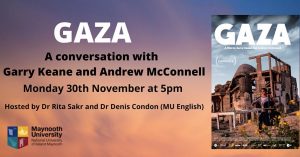 If you haven’t yet seen the film, you can rent it online here.

From the Directors’ Note:

‘There are few places in the world that evoke such a strong visceral response as Gaza… How do you tell the story of such a place?…This is Gaza as you have never seen it before. Far from being a place of misery, it is a land of smiles, joy and even brief moments of hope. We weave these elements with threads of despair, frustration and fatigue, allowing the audience to look deeper and ultimately to understand that life in Gaza moves in cycles, with the weight of the past bearing down on any hope for the future.’