[Galway] Shawan Jabarin: The current situation in the Occupied Palestinian Territory, a perspective from the field 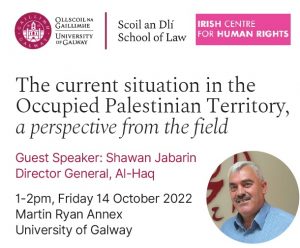 Shawan Jabarin, the Director General of Al-Haq, will deliver a public lecture at the University of Galway on at 1pm Friday 14 October 2022 in the Martin Ryan Annex.

The lecture is free and open to the public. No registration is necessary.

Shawan will speak on the current human rights and political situation in Palestine. His talk comes at a time of serious Israeli repression of the activities of human rights organisations in the Occupied Palestinian Territories, including Al-Haq.

Based in Ramallah, Al-Haq is the oldest human rights organisation in Palestine and has documented and reported on human rights violation for many decades. Shawan Jabarin will speak to its work in challenging Israeli practices which violate international law, including the use of lethal force, collective punishment, arbitrary deprivation of liberty, and the construction of settlements. The current attacks on civil society organisations serve to perpetuate the system of apartheid which Israel has established in Palestine.

Shawan Jabarin has worked as a human rights defender for over thirty years. He has personally been subject to administrative detention without trial, travel bans and death threats for this invaluable work. He has been supported in campaigns by Amnesty International and Front Line Defenders, amongst others, and has been the recipient of numerous awards, both personally and on behalf of Al-Haq over the years. He was awarded the distinguished graduate award by the Irish Centre for Human Rights in the School of Law at the University of Galway in 2010, having completed an LLM degree in 2005 supported by the Irish Aid programme of the Department of Foreign Affairs and Trade.

“We are delighted to have Shawan Jabarin come to Galway and speak at the University at this challenging time for human rights work in Palestine”, said Professor Ray Murphy of the Irish Centre for Human Rights. “He is a dedicated and passionate advocate and we are privileged to be able to learn from him about the ongoing oppression and human rights violations of the Palestinian people”.

The event is hosted by the Irish Centre for Human Rights and School of Law in Galway University.