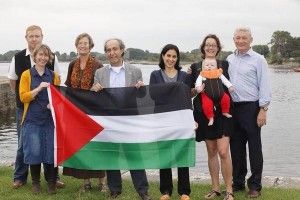 On Thursday 27 November, the Galway Palestine Solidarity Campaign will
hold a talk on the boycott of Israeli goods by business owners and
consumers in the town of Kinvara in Monroe’s Tavern, Dominick Street,
at 7pm. The meeting will be addressed by John Griffin and Frank
Naughton, two members of the community in Kinvara who helped organise
the boycott after numerous conversations in the local community about
Israeli atrocities. The boycott, initiated in August 2014, was a
direct response to the barbaric attacks on the people of Gaza by the
Israeli military forces, with left over 1,800 Palestinians dead.

The boycott, observed by local retailers, salons, cafés and
restaurants, applies to all direct exports from Israel including fresh
fruit and vegetables like oranges and potatoes, beauty products by
brands like Dead Sea, hardware products, such as Black & Decker
toolboxes, as well as Israeli-made toys. Modelled after the boycotts
of apartheid South Africa in the 1960s onwards, it makes Kinvara the
first town or village in Ireland to collectively endorse an Israeli
boycott.