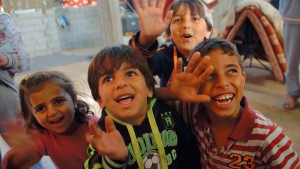 The Galway Film Fleadh Human Rights strand of short documentaries features films from conflict zones, border crossings and refugee camps. A collection of stories from those on the frontline as they fight for freedom, dignity and a normal life.

These four short films will be screened on Fri 8th July at 10am in the Town Hall Theatre, Galway.

The Border offers a glimpse of the stories of some of the women, men and children making long and perilous journeys to seek refuge in Europe.
Director Caoimhe Butterly
Producer Caoimhe Butterly

Backlash: The War on Human Rights

Violent attacks against human rights defenders are not new. But a new threat is taking hold globally with the potential to affect all our lives.
Director Nuala Cunningham
Producers Nuala Cunningham, Ciaran O’Connor

Hosted by the Galway Film Fleadh